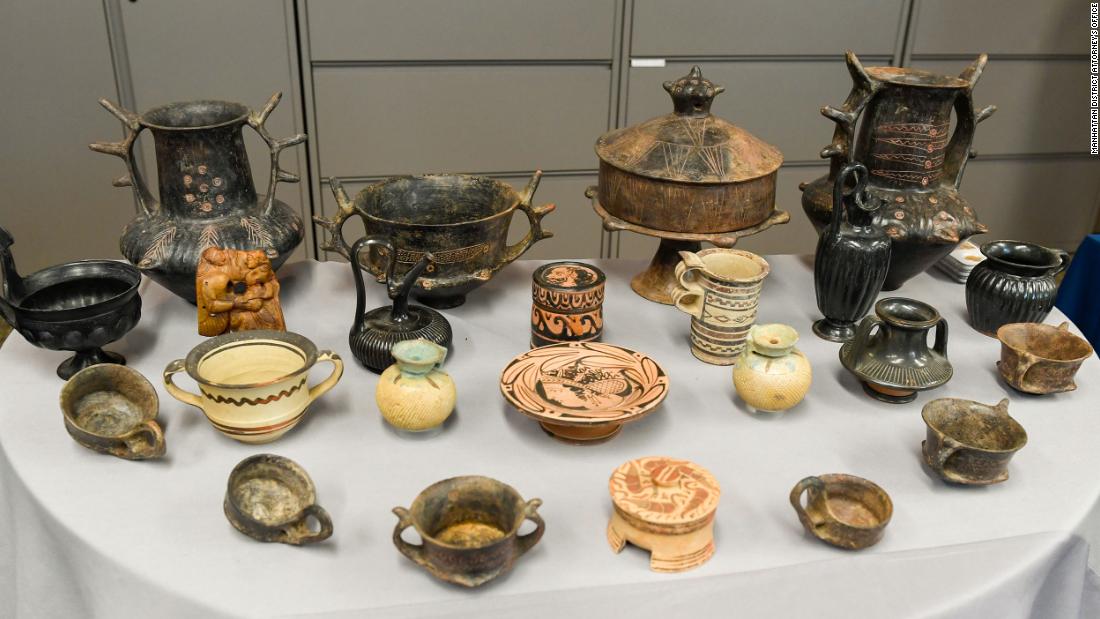 Officials in New York have returned stolen antiquities worth nearly $14 million to Italy, including dozens of items seized from American billionaire Michael Steinhardt.

More than a third of the 142 objects returned at a ceremony Wednesday had previously belonged to the former hedge fund manager, who was once among the world’s most prominent collectors of ancient art, according to the Manhattan District Attorney’s office.

Among the repatriated objects was a 2,000-year-old fresco depicting a young Hercules strangling a serpent. Worth an estimated $1 million, it was looted from an archaeological site near Italy’s Mount Vesuvius in 1995.

Later that year, Steinhardt bought the work without seeing evidence of the ownership history, according to the investigators. Another 47 items from his collection were among the returned items.

In a statement, Italy’s consul general in New York, Fabrizio Di Michele, said the restitution was “very important for our country.”

The announcement follows a yearlong investigation into Steinhardt, who avoided charges after he surrendered 180 items, worth an estimated $70 million, and agreed to what officials called an “unprecedented” lifetime ban on acquiring antiquities.

In recent months, items from his collection – ranging from statues and sculptures, to gold masks, bowls and ceremonial vessels – have been returned to countries including Iraq, Israel and Turkey.

The “Ercolano Fresco”, which dates back to AD 50, was among the items repatriated. Credit: Manhattan District Attorney

Among them was a $1.2 million marble statue of a veiled woman’s head, which was repatriated to Libya in January. A helmet believed to have belonged to Alexander the Great’s father, Philip of Macedon, was meanwhile handed over to Bulgaria. In February, 47 items from Steinhardt’s collection were returned to Greece, including a rare statue valued at $14 million.

The investigation looked at more than 1,000 antiquities linked to Steinhardt since at least 1987. Authorities found he had looted items that had been smuggled out of 11 countries by 12 criminal networks.

After the investigation’s conclusion in December, then-Manhattan District Attorney Cy Vance, Jr. said that Steinhardt had “displayed a voracious appetite for looted objects without concern for the legality of his actions, the legitimacy of the pieces he bought and sold, or the serious cultural damage he caused inflicted across the globe.”

In a statement provided to CNN at the time, Steinhardt’s attorneys, Andrew J. Levander and Theodore V. Wells Jr., said their client was satisfied that the investigation had concluded without any charges “and that items wrongfully taken from others will be returned to their homeland.”

They claimed that “many” of the dealers Steinhardt purchased stolen items from had “made specific representations regarding the dealers’ legal title to the items, and their purported provenance,” adding: “To the extent these representations were false, Mr. Steinhardt has reserved the right to seek compensation from the dealers involved.”

Of the other 94 items returned to Italy on Wednesday, 60 had been recovered from the Royal-Athena Galleries, a now-defunct New York gallery founded by antiques dealer and forgery expert Jerome M. Eisenberg. The district attorney’s office did not suggest any wrongdoing by Eisenberg or Royal-Athena Galleries, which it thanked for its “assistance and cooperation” in the investigation.

The other 34 items were linked to “other ongoing investigations”.

Top photo: Some of the looted items were returned to Italy by officials in New York.

The love horoscope for each zodiac sign on Wednesday, August 10, 2022 Parents of Archie Battersbee, a British boy in a coma, lose life support