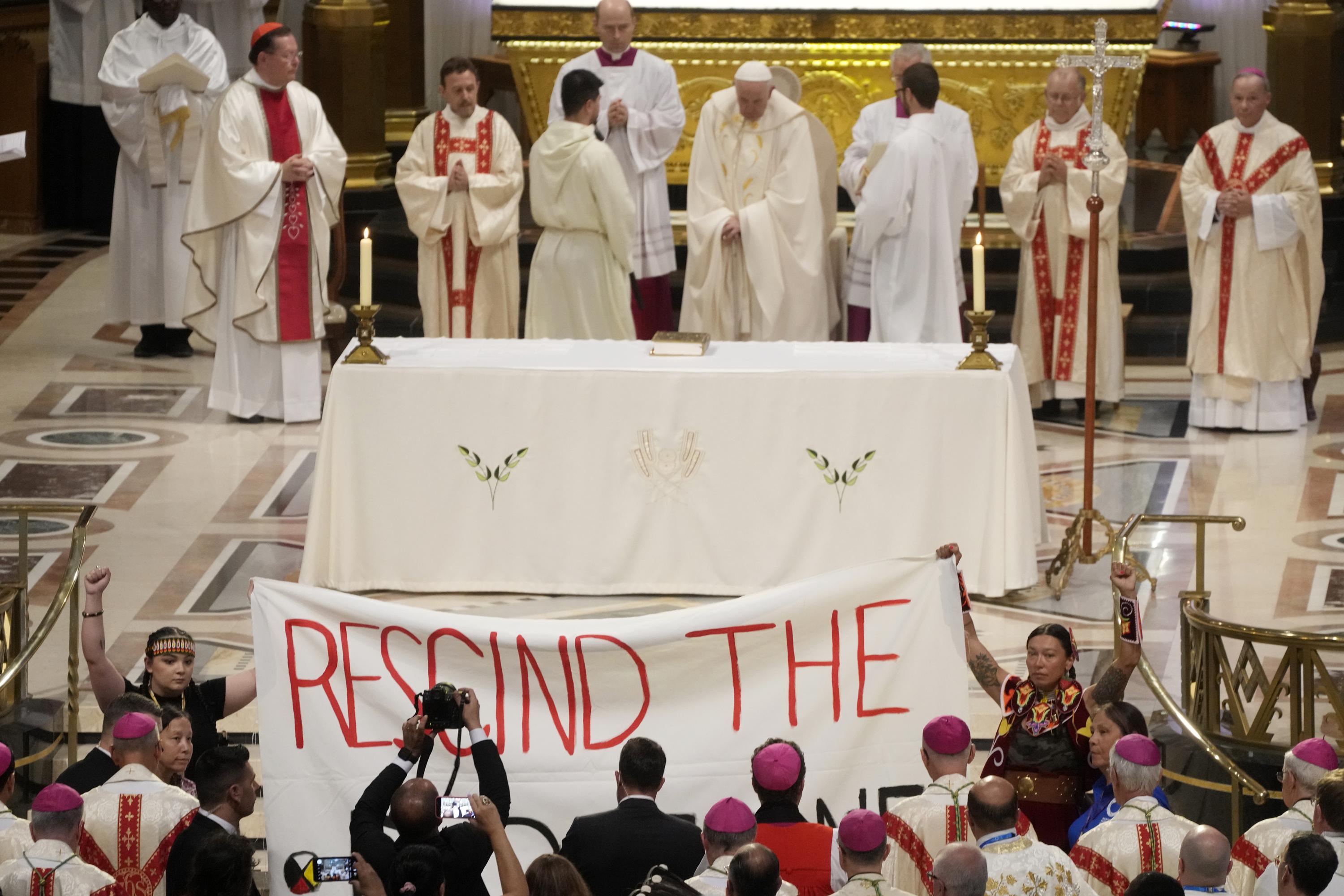 ST-ANNE-DE-BEAUPRÉ, Quebec (AP) – Pope Francis celebrated Mass Thursday at Canada’s national shrine and came face to face with a longstanding demand from indigenous peoples: to formally rescind the papal decrees that underlie the so-called “Doctrine of Discovery ” which legitimized the colonial seizure of native lands and resources.

Just before Mass began, two indigenous women unfurled a banner at the altar of the Sainte-Anne-de-Beaupré national shrine that read: “Repeal the Doctrine” in bright red and black letters. The protesters were escorted away and the Mass proceeded without incident, although the women later marched the banner out of the basilica and draped it on the railing.

The brief protest underscored one of the remaining problems facing the Holy See after Francis’ historic apology for the Catholic Church’s involvement in Canada’s notorious residential schools, where generations of Indigenous people were forcibly removed from their families and cultures in order to assimilate them into Christian Canadian society. Francis has spent the week in Canada to atone for the trauma and suffering of First Nations, Metis and Inuit people.

Beyond the apology, indigenous peoples have urged Francis to formally revoke the 15th-century papal decrees, or bulls, that gave European kingdoms religious support to expand their territories to spread Christianity. These decrees have been seen as underpinning the Doctrine of Discovery, a legal concept created in an 1823 US Supreme Court decision that has been understood to mean that ownership and sovereignty over land passed to Europeans because they “discovered” it.

Prime Minister Justin Trudeau cited the need for the Holy See to “address the doctrine of discovery” as well as other issues, including the return of indigenous artifacts in the Vatican Museumsin his private talks with Francis on Wednesday, Trudeau’s office said.

Several Christian denominations in recent years have formally rejected the Doctrine of Discovery. The umbrella organization for US women’s Catholic religious orders, the Leadership Conference of Women Religious, formally asked Francis to do so in 2014, saying he should reject “the period of Christian history that used religion to justify political and personal violence against indigenous nations and peoples and their cultural, religious and territorial identities.”

Murray Sinclair, First Nations chairman of Canada’s Truth and Reconciliation Commission, cited the doctrine in a statement this week welcoming Francis’ apology but urging him to take responsibility for the full role of the church in Canada’s residential school system.

“Driven by the Doctrine of Discovery and other ecclesiastical beliefs and doctrines, Catholic leaders not only enabled Canada’s government, but pushed it even further in its efforts to commit cultural genocide against Indigenous peoples,” Sinclair said.

Church officials have insisted that the papal decrees have long since been repealed or replaced by others that fully recognize indigenous peoples’ rights to live on their lands, and say the original bulls have no legal or moral significance today. Throughout his journey, Francis has repeatedly asserted these rights and rejected the assimilationist policies that drove the residential school system.

But both the Vatican and the Canadian tour operators have confirmed that a new statement is being prepared to address the demands for a current, formal rejection, although it is not expected to be released during Francis’ visit.

“The Vatican has clarified that the papal bulls related to the Doctrine of Discovery have no legal or moral authority in the Church,” Neil MacCarthy, in charge of communications for the papal visit, told The Associated Press in an email. “However, we understand the desire to name these texts, acknowledge their impact and renounce the concepts associated with them.”

Asked about the protest on Thursday, MacCarthy said: “We recognize that there are very passionate feelings about a number of issues, including the Doctrine of Discovery. The brief peaceful protest did not disrupt the service and the group had a chance to express their concerns.”

The service itself incorporated many indigenous elements and people, including an emotional moment when a woman in native dress wept in front of Francis as she presented him with the gifts. Francis did not mention the doctrinal issue in his homily, which spoke in general terms about reconciliation and the need for hope.

The Vatican clearly anticipated that the problem would arise during the trip. In an essay in the current edition of the Vatican-approved Jesuit journal La Civilta Cattolica, Rev. Federico Lombardi acknowledged that the issue remains important for indigenous peoples, but stressed that the Holy See’s position in rejecting the doctrine of discovery is clear.

Lombardi, the retired Vatican spokesman, cited the subsequent bull “Sublimis Deus” of 1538 which asserted that indigenous peoples “should in no way be deprived of their liberty or possession of their property, even if they are outside the faith of Jesus Christ; and that they may and should freely and lawfully enjoy their liberty and possession of their property; nor shall they in any way be slaves.”

Felix Hoehn, a professor of property and administrative law at the University of Saskatchewan, said any rejection of papal bulls or doctrines would have no legal significance for land claims today, but would have symbolic value.

“The Vatican does not make Canadian law. Courts are not bound by papal bulls or anything like that, but it would be symbolic, Hoehn said. “It would add moral pressure.”

Philip Arnold, head of the religion department at Syracuse University in New York, which sits on Onondaga Nation territory, said the issue of the doctrine is not new or “less aggressively invasive today.”

“The Vatican’s role in justifying the doctrine of Christian discovery in the 15th century is the origin story of the transatlantic slave trade, land theft and a settler-colonial extractive economies throughout Africa and the Americas,” he said in an email.

For its part, the Canadian Bishops’ Conference in 2016 published a statement strongly rejecting the doctrine as well as the related concept of “terra nullius”. This 19th-century term is also understood to legitimize the seizure of indigenous people’s land, in that European settlers considered land “unused” if it showed no signs of European agricultural practices. 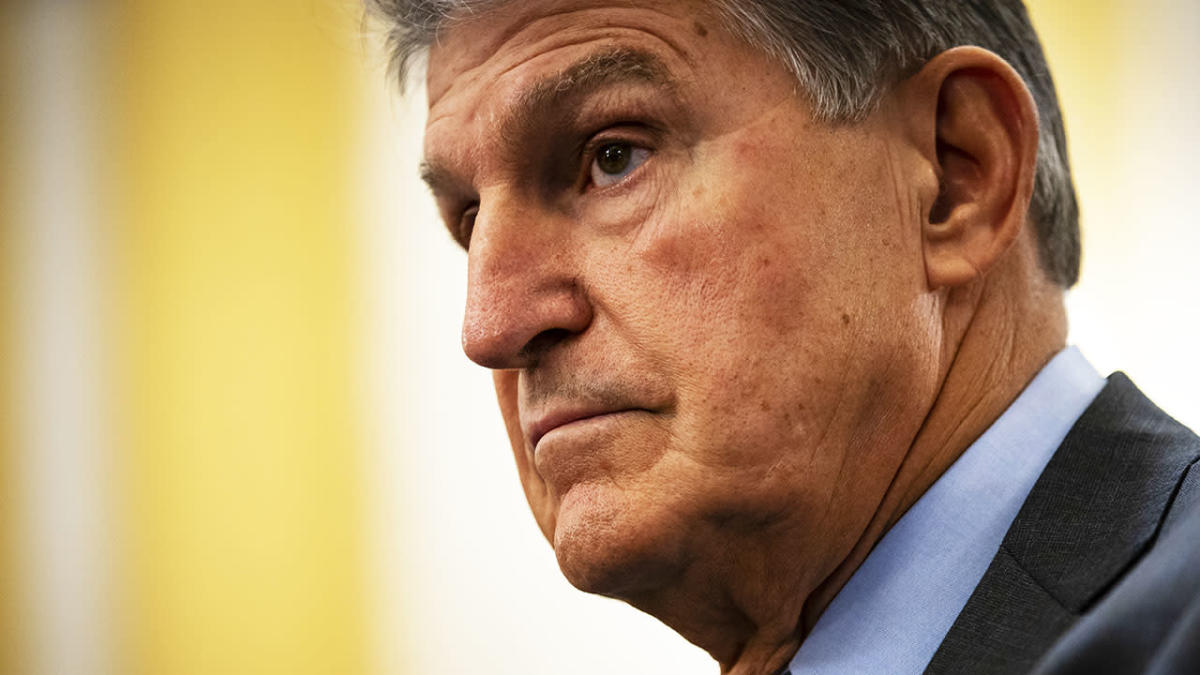 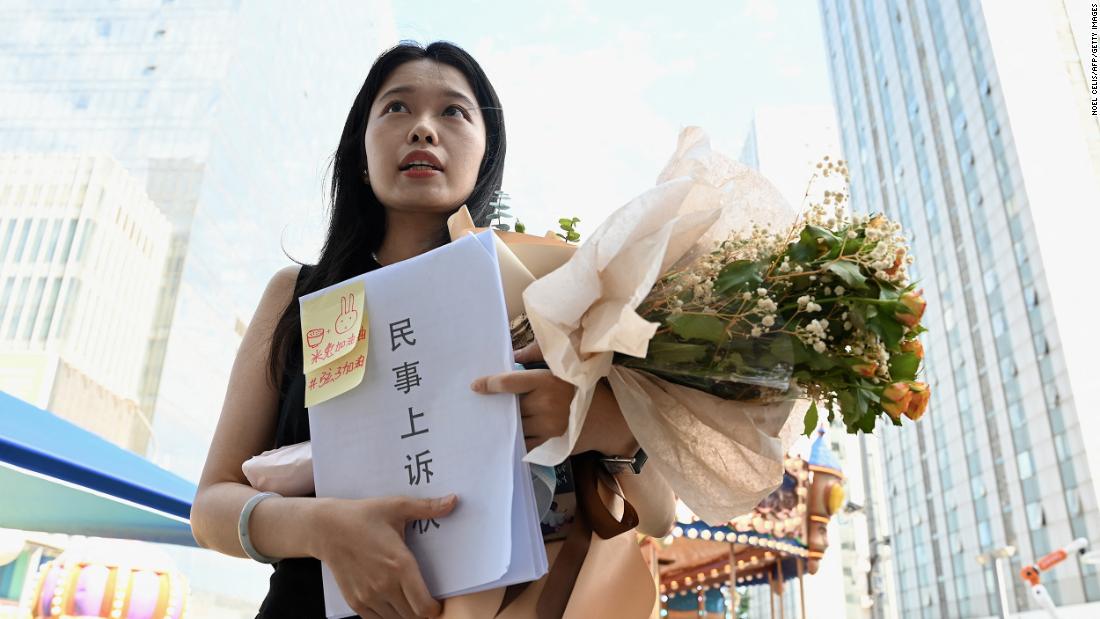 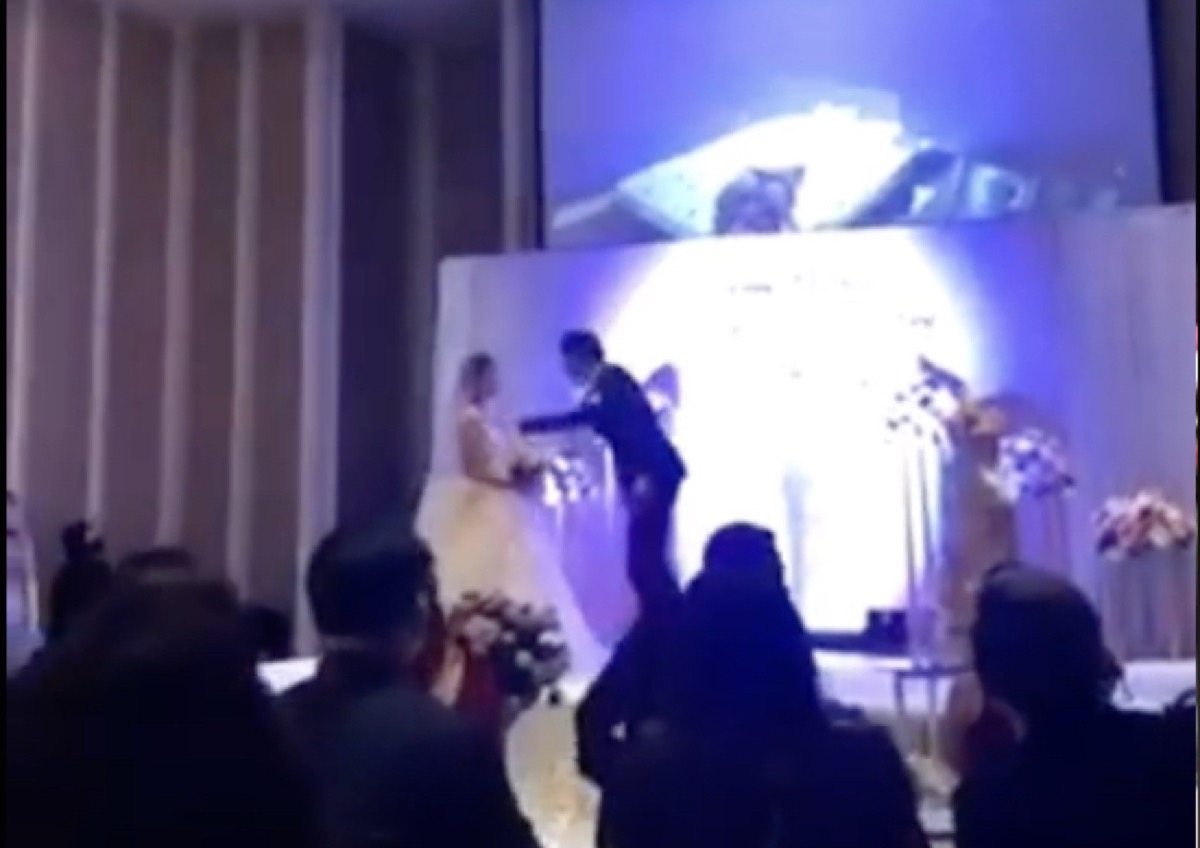